Home  /  Celebrity  /  5 Steps To Kendall: A Look At Her Aesthetic Staples

5 Steps To Kendall: A Look At Her Aesthetic Staples

I’ll say it here and now, because I’m not afraid of being controversial: Kendall Jenner’s sense of style tends to be underrated, particularly when we’re talking about what she wears out and about, and not in fashion shows. (Because I’ll be serious: The day I wear actual Victoria’s Secret Angel wings is the same day I stop wearing XL T-shirts and PJ pants to bed — never.)

Between her casual looks, her mix of the fancy and everyday, and her super dressed-up numbers, you can’t help but pay kudos to her unique take on classics. If we’re being specific, girlfriend tends to opt for pieces that we mere mortals can also wear and wear with ease. And Kendall does a pretty good job of abandoning fashion norms for wearing whatever she wants — a.k.a., the perfect approach to style.

Just don’t blame me when half your wardrobe is made up of vintage tees for bands your mom and dad saw a bunch in the early ’80s, or so many bomber jackets you actually try and justify not wearing a proper parka in the midst of the polar vortex. Click through for five pieces you need to channel your best Kendall Jenner life.

The other day I went to the mall, and in at least three different stores I pointed to the nearest bomber jacket and brought up Kendall Jenner. (Specifically, I said, “This is totally a Kendall Jenner jacket.” Which I think a trademark officially makes.)

Ultimately, it’s no secret to you or me or the ghosts of those who created the bomber that Kim K’s little half-sister has picked up and embraced the piece to the point where it’s affiliated not just with her, but with her BFF, Gigi Hadid. (Read: It’s a bonding mechanism.) Which is fine. The bomber jacket is an easy thing to wear, especially since Kendall’s proven you can wear it off-the-shoulder and dressed up, or as part of the most comfortable look in the world. It holds up in the winter (if it’s mild), in the summer (if it’s chilly), and looks just as good with skinny jeans and tights as it does with shorts or boyfriend jeans.

Bombers are the Converse of the jacket world: They’ve earned their place, and we’re all the better for it. At least, that’s what I tell myself as I hoard them to the point of familial concern. 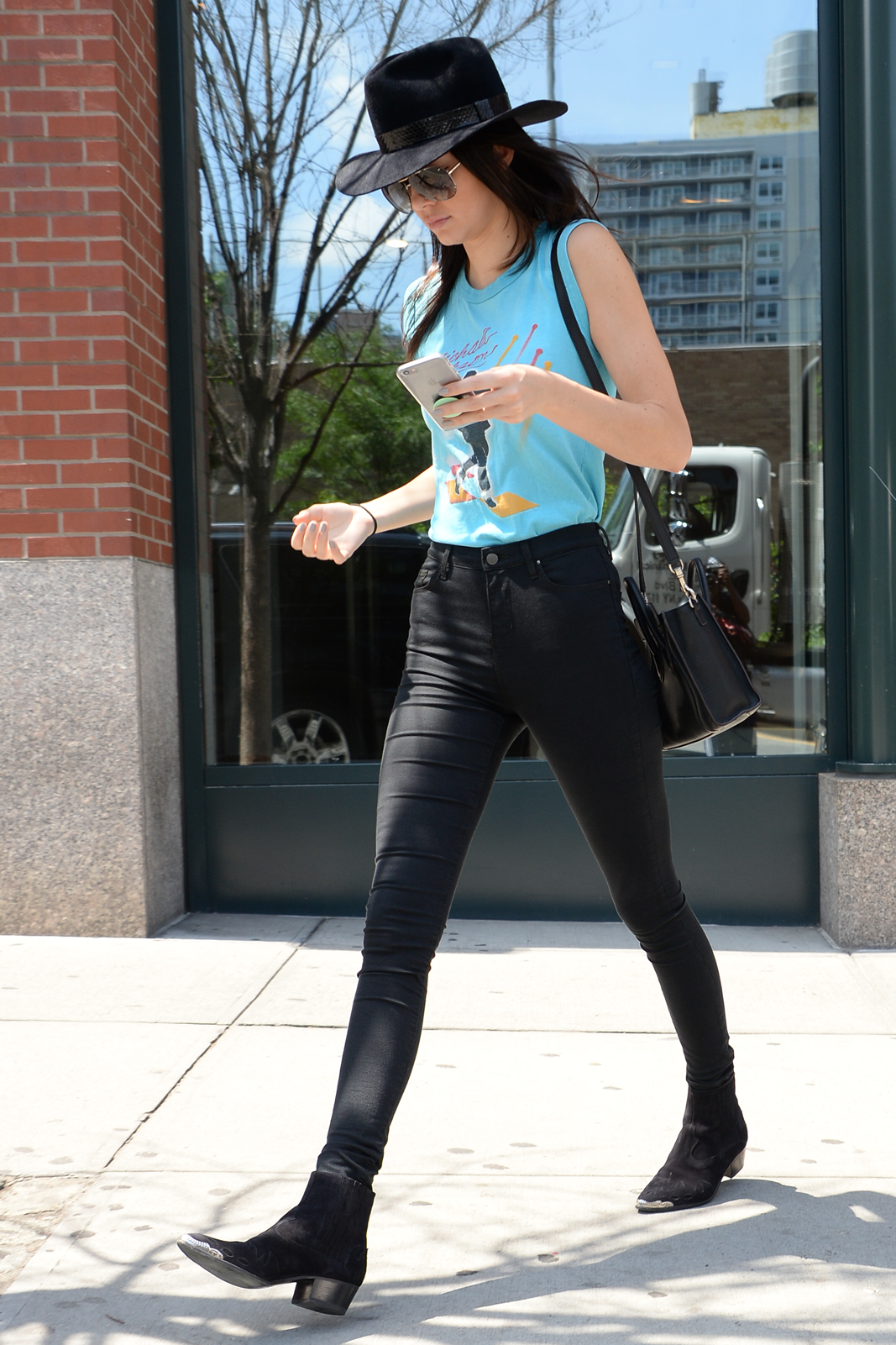 Breaking news, I know: Vintage graphic T-shirts are hip and cool, and you can’t really wear them incorrectly even if, like Kendall, you cut yours up to the point of them being illegible. (But no judgement, and full bless.) So ultimately, her penchant for the pieces we all already have and wear is a testament to how easy it is to embody that Kendall J. aesthetic. Over the last year, we’ve seen her pair T-shirts with skinny jeans, evoking a Dazed and Confused vibe; wear one with leather leggings (which was very KISS appropriate); and sport one while hanging out on a bike, because, honestly, why not.

Mainly, the secret to wearing a vintage tee is that there are no secrets. You can combine it with a bomber, with trousers, with distressed denim, or whatever the hell you want. And you can also pick them up at thrift stores for next to nothing — or better, at chains like Value Village for even less than that. Which, I guess, explains why Kendall was so brave in cutting hers up.

This winter, I have vowed to wear less jeans, and it’s all because of Kendall Jenner. Just kidding, it’s because trousers are the shortcut to feeling put-together and like a capable, grown-ass woman, even if you happen to be writing about said trousers in your pajamas while chugging a venti gingerbread latte at 12:30 in the afternoon. But I digress.

While Kendall’s look tends to be more casual and less streamlined than any of her sisters’, when she means business she dresses the part. (Mainly, she serves up the Businesswoman Special™.) The thing is, her love for trousers doesn’t discriminate, as evidenced by the high-waisted style we saw her in last January, or by her knack for pairing bright blue ones with a cropped sweater. And that’s because trousers are the greatest clothing gift of all: You can dress them up, dress them down, and as long as you’re not wearing them with an oversized sweatshirt and chunky boots, like I did in high school, you’ll look exactly as put-together as Kendall herself — or, more importantly, Romy and Michele.

Good luck trying to narrow down the type of tops Kendall wears most often to a single word, because I tried and this description was as good as it got. But basically, it’s simple: Jenner is far from the spokesperson for, say, oversize flannel or a button-up blouse. When it’s not the vintage T-shirt variety, her go-to pieces are sheer, cropped, or plunging, which means that to make her vibe your own, simply opt for items you once might have deemed “risqué.” (Spoken by me, a person who didn’t wear crop tops until June of this year — as in, 2016.)

It’s super-easy to get hung up on what we “should” or “shouldn’t” wear, particularly when we frame those misconceptions in terms of age or size or any reason other than the fact that we want to wear particular pieces. So maybe it’s easier to put it this way: Choose tops in which you feel your best self. (Even if you have to start by wearing a baby tee under a slip.)

But after all this talk of trousers and feeling fancy, it’s time to get down to the thing we all thrive in: denim. Particularly the distressed variety. We’ve seen her in frayed cutoffs, more frayed cutoffs, and vintage high-rise jeans — like the Levi’s RE/DONE style she was seen in back in February.

Which makes this the icing on the already stacked style cake: You have the jacket, the top, and you’re completely over your trousers. So now you can roll into distressed denim, pair them with boots, and bask in the warm glow of knowing you can basically go to bed in your jeans and feel almost as comfortable as if you were wearing joggers. That, or I’m trying to convince you guys to go to bed the same way I do: in my clothes, writing about jeans.